Coroutines are a great way of:

See some more usage examples there.

For example you could easily imagine using a coroutine to orchestrate a cut scene sequence – or simply wait for an enemy to animate dying, pause and then respawn.

If you just want to delay an operation for a few seconds time you could consider just using Invoke. You can use coroutines of course, but for beginners Invoke is easier.

First of all, coroutines are not threads and coroutines are not asynchronous.
A thread is a process that runs asynchronously with the other threads in the program. On a multiprocessor machine, a thread can really be running its code at the same time as all of the other threads. This makes programming threads a complicated thing to get right, because one thread could be changing something at exactly the same time as another thread is reading it. This is even more complicated because the code you write is turned into assembly language by the compiler – which means another thread could actually change something in the middle of the game processing what appears to be a single line of your source code. Because of this you have to go through hoops to ensure that such circumstances don’t occur by either making sure that there is no shared memory or by locking other threads out of shared values while they are being read or changed.

So what is a Coroutine?

Since coroutine is not multi-thread it will be executing on the main thread of the game, it will then be the only thing in the core game code running at that time.

You never need to worry about synchronization or locking values when you are programming a coroutine.

So here is the definition of what a coroutine could be:

A coroutine is a function that is executed partially and, presuming suitable conditions are met, will be resumed at some point in the future until its work is done.
The start of a coroutine corresponds to the creation of an object of type coroutine. That object is tied to the MonoBehaviour component that hosted the call.

Unity processes coroutines every frame of the game for every object that has one or more running. The processing occurs after Update and before LateUpdate for most yield statements, but there are special cases: 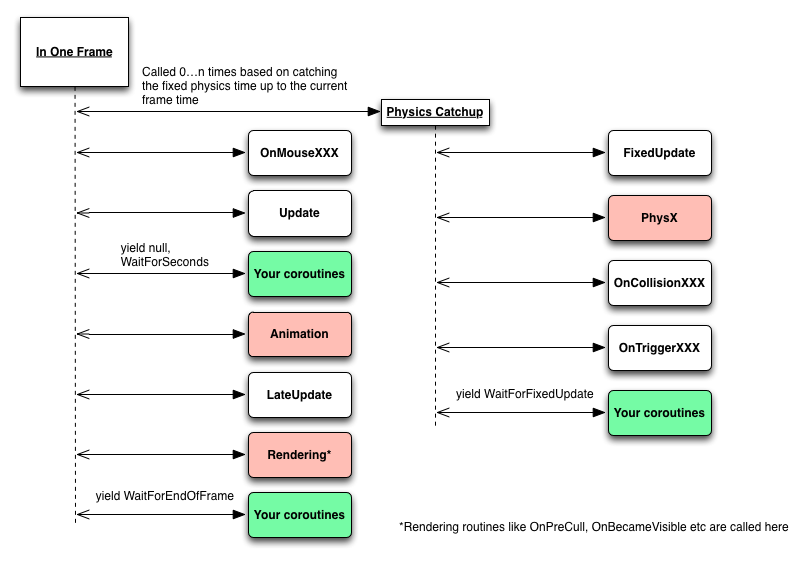 When the coroutine is activated it will execute right up to the next yield statement and then it will pause until it is resumed. You can see where it will resume in the diagram above, based on what you yield.

The code inside the loop is exactly like an Update function. It runs once every frame for this object, just after the script’s Update routine runs (if it has one).

When you call StartCoroutine(TestCoroutine()) the code executes immediately up to the first time it yields, it will then be resumed when Unity processes coroutines for this object. The call is actually short for this.StartCoroutine clearly indicating that the call is done from the MonoBehaviour component.

If you expect the Start to wait for the end of the coroutine before it finishes, consider the following:

The calls for the end of the Start method is postponed until the coroutine is done. This requires the yield return for the coroutine and the Start method to return IEnumerator. Despite the fact it is possible and legit, Unity tends to not recommend that practice (without giving any reasons so it might be internal).

To Infinity and Beyond

That loop will never execute again if you make a call to stop the coroutines on the game object and it will not run again if the object is destroyed. It will also be paused if the script is disabled directly or by using SetActive(false) on the game object. This clearly shows the link between the MonoBehaviour and the coroutine.

The renderer and collider are off, the explosion is happening and when over, the callback is called to destroy the object.

Second solution, you find a MonoBehaviour that is meant to live long enough, most likely a dedicated manager:

So I made a statement in the last section that you might be questioning. I said:

Unity processes coroutines every frame of the game for every object that has one or more running.

You may be thinking that it doesn’t in case like yield return new WaitForSeconds(1).

Unity does process that coroutine every frame, checking to see if the right amount of time has elapsed – it doesn’t process your code, but it does process the coroutine which is the wrapper it’s made around your script.

Here’s what you can yield:

You can also issue the command yield break; which immediately stops the coroutine.
Because of WaitForEndOfFrame, coroutines can be used to get information from render textures when all cameras have completed rendering and the GUI has been displayed.
Using yield return new WaitForSeconds(x) will never resume if the Time.timeScale is set to 0.

The second example makes use of a string parameter and one object parameter. This was useful before Unity allowed to stop a coroutine with IEnumerator. The only way was to call with a string and stop with a string. This process only allows one parameter (or then a bunch of them wrapped in an object).

Instead you can call the method directly inside if you plan on just running the coroutine, or use a IEnumerator reference:

The second case is a little more tricky, a call for the method is made and it returns a IEnumerator object. coroutineObj is a reference to that IEnumerator object, we pass it to StartCoroutine which actually starts the coroutine. With this solution, we are able to stop a single coroutine. Note that it is stopped, not paused, it won’t start again from where it left off.

First thing out of your mind, you should not think of using coroutines instead of Update, it is simply not their purpose despite doing a similar job, you won’t save resources nor memory. Keep them for temporary work, Update will do anything that should be done continuously.

Here’s an example of a coroutine to wait for an animation to be partially complete:

Nonetheless, you would get much better and more accurate result using the animation event system.

You could write a coroutine to wait for an animation like this:

Another example waiting for the end of a downloading to remove a “Loading…” UI.

One major issue is that you cannot pass ref parameter. Consider you have a value that you wish to alter within the coroutine and then use it outside. For instance, you have a method that download an assets from the server and assign to a byte array. Later you will manipulate that array.

We cannot just pass the array since assigning it inside the coroutine would result in not affecting the outside version (think that the parameter would just be a copy of the original reference). Using ref is not allowed on coroutine. So we use Action.

A bit more complex but working just fine. We can even pass multi values no matter what.

View all posts by fafase